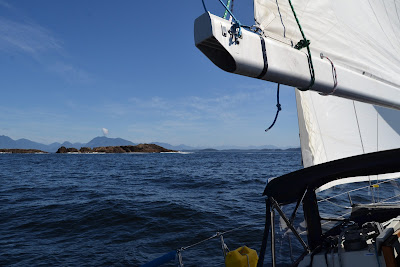 The weather finally turned, and we left Ucluelet on a bright and sunny morning on Saturday, August 31. We actually got to sail for a change, so we were feeling pretty good about life. We were clean, well-fed, stocked up, and dry.

Our destination was Effingham Bay, the only all-weather anchorage in the Outer Islands of the Broken Group. All the other coves were exposed to seas or winds from some direction, so we planned to use Effingham as a base for the mothership while we explored in the dinghy.

We enjoyed seeing some of the sights we had missed on our sodden return trip to Ucluelet as we wove through the rocks and reefs guarding the island group. These were the outermost of the barriers that kept the worst of the swells out of the island anchorages, and as such they were barren and windswept. 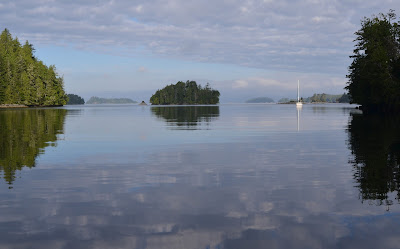 Effingham Bay has capacity for many boats, and the guides suggested that it would be crowded. It was empty, of course. We arrived there a few minutes before a larger powerboat, and took the prime spot in the southeast cove. It was quite deep, over 40 feet, and not very wide, so we swung on less anchor rode than we would usually use. It didn't matter, no wind penetrated our hideaway during our stay. The currents in the cove did manage to twirl us around repeatedly, to the point that our anchor chain almost had knots in it when we brought it up, there was so much twist in it. Ever since we lost an anchor when a swivel failed, we had used just a moused shackle between the chain and the anchor, so there was no way for the twist to relax. 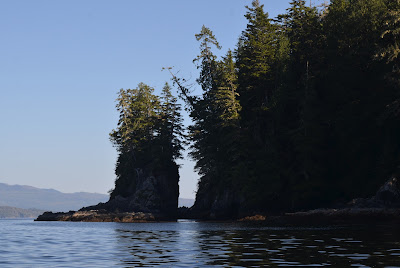 We mounted our first dinghy expedition around Effingham Island itself, since there were reported to be some interesting rock formations on the south side. There was a trail that started at the head of our cove which led across the island, but after seeing the wet and muddy condition of the first group to return, we opted to do the dinghy run around. We were glad we did, there were some sea stacks and sea caves that we never would have seen from the land route.


There were a couple of places that we were tempted to try to go into or through in the dinghy, but the thought of damaging the boat on the sharp rocks so far from help changed our minds. We satisfied ourselves with less involvement in the scenery.
As we came around the southeast corner of the island we could feel the swell coming in, and all along the south and west shore the waves crashed on the rocks. It was a little intimidating at first, with a 3-4 foot swell lifting our 8-foot dinghy, but we got used to the motion after a while and enjoyed the view as we rocked and rolled along the island. 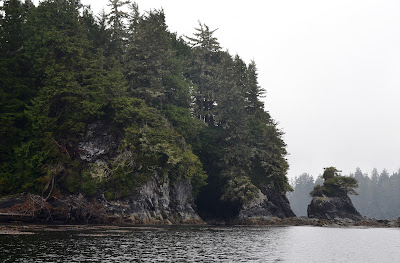 Our second dinghy expedition took us further afield, to a small island closer to the open ocean. The offshore fog bank had moved in a little closer, so there was a lot of fog and mist here. Dicebox Island was at one point quite populated, with nine longhouses, but now it is empty and quite barren. It has several interesting caves, some of which you can access by foot or by dinghy. 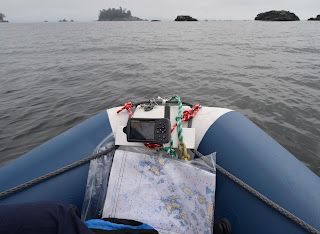 The islands, islets, and random rocks of the Broken Group can be quite confusing, especially in fog, so I rigged up a dinghy mount for our portable chartplotter. We always have real paper charts on hand, just in case, but knowing exactly where you are in relation to the rocks is invaluable. If you get trapped in whiteout fog the paper isn't much use but the chartplotter could save your life. 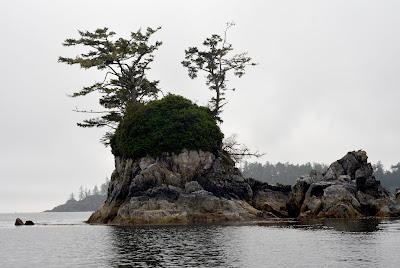 Some of the islets are quite odd-looking, green growth contrasting with the bare rock, and trees growing in the smallest of cracks.
We called this one "Grumpy Old Man Rock". It reminded me of an elderly Popeye. 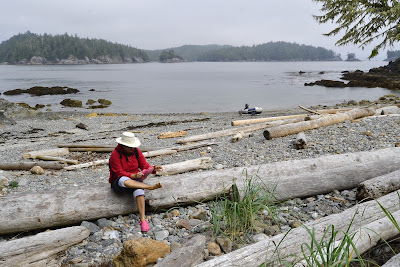 Circling Dicebox, we came upon a beach with good landing in sand and smooth rock, so we beached the dinghy and had a look around the island. We could not get to the most interesting cave on foot, but we finally found a trail to the other side of the island, which looked suspiciously unused, but it was five minutes of easy climbing to the beach on the far side. 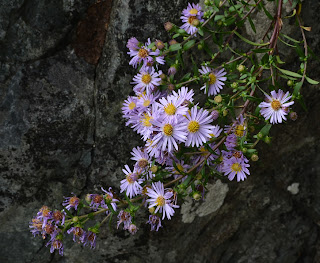 "Beach" is a kind word for the jumble of rocks that we found, but even in this forbidding place we found beauty. Flowers will somehow grow even in the most unlikely of tiny spaces. 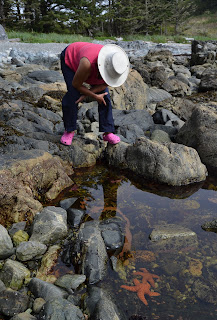 As barren as the land is, the sea is full of exuberant life. In the tide pools, tiny hermit crabs, wearing the castoff shells of dead snails, and miniature sculpins went about their business, ignoring the looming humans staring at them. Starfish, some of them very odd-looking, were hanging on every surface. The rocks exposed to the pounding surf were thick with huge mussels, and only the lack of a fishing license prevented us from filling the dinghy with them. Next time, we get a license. Free food, especially of this quality, is not to be passed up. 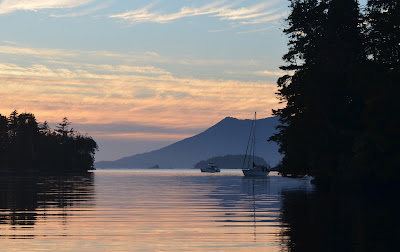 We spent two days at Effingham Bay, enjoying the warm sun and calm seas, watching boats come and go. We were joined in the bay by several boats, which was very strange after being alone so much, but there was only room for one boat in our cove so everyone anchored well away from us.

The weather was holding, mainly sunny and calm, so we thought we would try one of the "conditional" anchorages in the outer islands. Wouwer Island had come highly recommended by several cruisers we had met in Ucluelet, so we reluctantly weighed anchor and motored out of Effingham.

The holding tank was full, so we motored out to mid-channel to pump it out. Anne went below to throw the switch, and came up shortly saying the pump had stopped suddenly after a brief grunting. I went below to check, and indeed the pump threw the breaker every time I turned it on. The macerator pump, which had been sounding increasingly distressed lately, had finally expired.

This wasn't a total calamity, since I had a spare pump on board, but there was no way I was looking forward to the impending pump dismounting and reinstallation. We anchored off Wouwer Island and got to work. I had planned well, I had a piece of plastic sheeting big enough to line the hull area under the pump, there was a shutoff valve on the tank before the pump, and I had a strong stomach. I needed it. Hanging head-down under the V-berth is bad enough, but throw in a quantity of well-aged sewage and it's something out of Dante. Anne was a trooper and helped in the disposal of said sewage overboard.

The old pump had been glued into the bronze valve body, and there was no way it was coming loose easily. I didn't want to stress it too much since the whole affair was supported only by the plastic fitting welded into the tank. I didn't have a pipe wrench, so I drilled a large hole through the pump body and tried twisting it off with a large screwdriver inserted in the hole. That was fruitless, so I hacksawed the pump off as close to the fitting as I could then made several hacksaw cuts on the inside of the remaining chunks of pump so I could break them loose. It was delicate work since I didn't want to damage the threads on the bronze fitting in the process. Two hours after starting the process, I had the new pump in place and wired up. 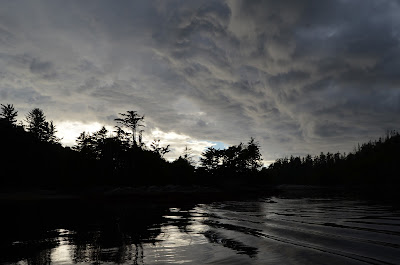 By this time it was getting late, so we set out a stern line to shore to stop us from swinging into the rocks and reef fringing our little sanctuary and settled in. It was surprisingly calm there even though we were right on the fringe of the ocean. No swells came in and after a good cleanup and dinner we slept the good sleep of exhaustion. 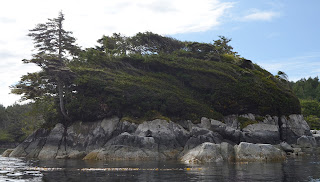 The next morning the sun shone and we loaded up the dinghy for more exploration. The rocks here, exposed to the pounding ocean, are smooth, and the trees and bushes cling to them in desperation. The wind has sculpted them into streamlined shapes that won't be torn off in winter storms. 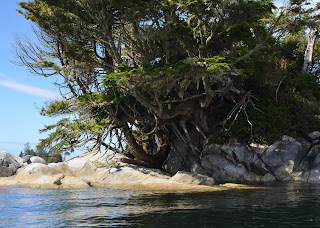 Who knows how these trees and bushes survive for many years on barren rock with no visible soil or fresh water. Looking at the way they have grown, crouched low to the rock, leaves you with a feeling of amazement. Life is pretty durable. 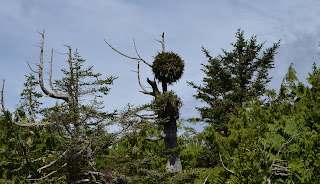 Life is also pretty weird sometimes. We don't know what these perfect balls of vegetation are, but they grow all over the dead trees in this area. Seen through binoculars, they look like something from a deranged florist. 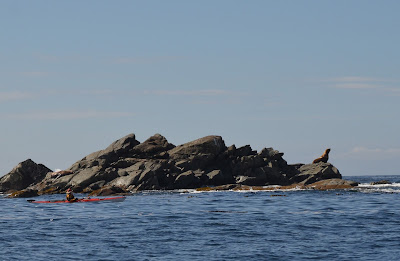 We had spoken to some kayakers who told us that there were sea lions on the rocks just around the corner from our anchorage, so we went for a look. True enough, even though we had been close to these rocks earlier and we hadn't seen any, on our return we saw several. Huge beasts, and smelly. They were apparently quite used to humans since they didn't move away from the group of kayakers who were there already, and ignored the motor noise from our dinghy also. 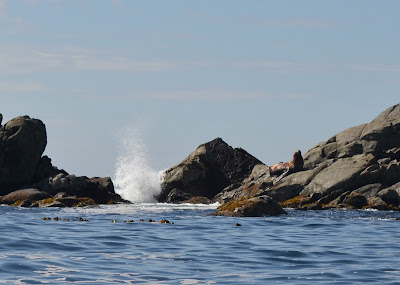 We stayed out there for quite a while, bobbing in the swell and backwash from breaking waves on the other side of the rocks. There were seals on the rocks too so we got a good dose of nature in the raw.


The weather forecast was looking good for another day or two but there was another front on the way, with gale warnings for our area, so we reluctantly took in our stern line, upped anchor, and motored out of the Broken Group towards our next destination. On the way, we deep-sixed the old macerator pump; there was no way we were going to carry that around with us. .
We had decided against Bamfield since it was going to add another hour to our trip and it was long enough already, so we were going to Dodger Passage, closer to the entrance of Barkley Sound. On the way across Imperial Eagle Channel the warning light came on and we shut the motor down. The new alternator belt had exploded. It appeared the belt dressing I had used on it had softened the rubber to the point that it shredded. The bottom of the engine compartment was covered in black rubber dust and bits of belt were all over. I was getting low on spares, I only had three belts left. It was the usual fun of working on a hot motor while pitching up and down in four-foot swells, but I was getting good at this by now and it only took ten minutes. We finally put the hook down in Dodger Channel and after a well-deserved happy hour, we had a late dinner went to bed with the alarm set for five AM. With close to 80 miles to go the next day, we needed all the time we could get.

Jim and Anne
Victoria, British Columbia, Canada
Jim - been sailing & loving it, seems like forever! Anne - sailing for a much shorter time but loving it, too